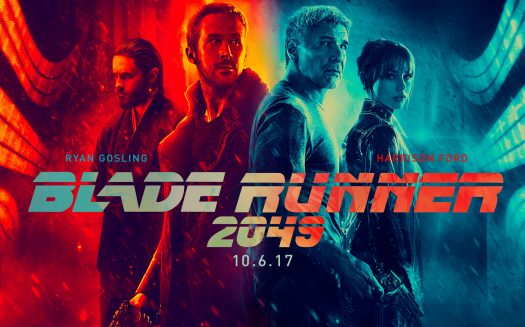 Today’s film landscape is largely populated by simple, spectacle-driven blockbusters. This setting primarily causes action movies to flourish, while more unconventional movies are left in the dust—this harsh environment has resulted in the new release Blade Runner 2049 gaining a minuscule attendance and the label of a financial bomb. This treatment raises the question: Is the movie worth the time of Northampton High School students? Does Blade Runner 2049 deserve better?

The sequel to the acclaimed 1982 film Blade Runner returns to the futuristic Los Angeles of the original, continuing its unique mix of mystery thriller and science-fiction. Although the original is one of the most influential of the sci-fi genre, it has taken over three decades to produce a sequel. This may be due to the fact that its predecessor needed several years to even find an audience, with its unique style initially gaining a mixed reception, barely breaking even. And considering how unconventional its sequel is in today’s landscape—a 163 minute, R-rated, big-budget sci-fi that is more meditative than action-packed is hard for most to swallow—perhaps it is hardly surprising that the new film has received a similar treatment thus far, even if whether this ignorance is deserved is debatable.

For the new film, original director Ridley Scott stepped down—the possibility of a filmmaker with no understanding of what made the original work could have killed the project, but luckily Denis Villeneuve more than fits the bill. With his tendency for crafting dark, bleak and cerebral thrillers, Villeneuve, one of today’s most exciting filmmakers, only last year releasing his acclaimed sci-fi Arrival, was a perfect fit for this film. He manages to make this new installment feel very similar to the original, capturing its bleak feel and immersing the viewer into the futuristic Los Angeles. One has to appreciate his willingness to make the movie so unconventional, as R-ratings and near-three hour run times can often be very detrimental to reaching a large audience, but Villeneuve makes the experience more rewarding by adding an unexpected layer of emotion.

The screenplay, penned by Hampton Fancher and Michael Green, is also excellent, although some viewers are likely to take issue with its length and pace. One has to appreciate that the two writers did not try to reinterpret Scott’s film into an action franchise, and instead chose to craft a meditative work expanding on the themes of the original. Carrying on in a world that actively produces replicants (genetically-modified humans that function as a slave-class), the movie asks what it means to be human in a world where the production of artificial life is possible. Often focusing on the blurred distinctions between man and machine, the movie explores these questions by following a protagonist in search for some meaning in this futuristic setting. It is so refreshing to see a movie chart this territory that one can forgive its occasional indulgence in sci-fi cliches—the picture features a robot revolution, an evil corporation, and borrows the concept of falling in love with a computer from Her. However, one area that the original screenplay handled much better was its villain—Rutger Hauer’s classic performance masterfully blurred the lines between hero and villain, as his character resorted to violent means to achieve the understandable goal of expanding his four-year life span. This time, however, it is much more obvious who is good and bad, with Jared Leto’s villainous business tycoon clearly falling into the latter category.

All across the board, Blade Runner 2049’s acting is superb, with most performers delivering their A-game. After first demonstrating potential as an action star in 2011’s Drive, Ryan Gosling continues on that promise in his role as the movie’s protagonist. Crafting a subtle and emotional performance, his character is one of the film’s many highlights. Harrison Ford, reprising his starring role from the original, despite not having as much screen time as the film’s advertising might suggest, more than compensates with what little he has—his turn is surprisingly nuanced and one of the best of his career, demonstrating a bitterness and sense of tragedy that has occurred in the gap between the two films. Ana de Armas, who portrays Gosling’s girlfriend, Joi, is so rich and full of life that one forgets her character is actually a hologram—it is surprising how she manages to make what is essentially an iPhone so emotionally engaging. However, the same cannot be said of Jared Leto, whose villainous turn feels overdone and one-dimensional. Admittedly, his casting does make some sense when taking into account his part was intended for the late David Bowie, but Leto’s pretentious ramblings bring the movie to a grinding halt whenever he’s onscreen.

In technical terms, Blade Runner 2049 is absolutely stunning. Often visually breathtaking, with many scenes that will make one’s jaw drop, this is not only one of the most beautiful and well-shot films of the year, but possibly ever. It will be shocking if cinematographer, Roger Deakins, the one most responsible for this visual wonder, doesn’t finally win his long-overdue Oscar for the movie. The picture effortlessly envelops the viewer into the world it has created, thanks to a flawless mix of practical effects and CGI (computer generated imagery) which blend so well it is often impossible to tell which is which. On the other hand, the musical score doesn’t hit the same peak as the visuals—while the soundtrack composed by Hans Zimmer and Benjamin Wallfisch draws viewers in and helps set the tone, it does not compare to original composer Vangelis’s mesmerizing, iconic score.

Additionally, it does need to be emphasized: Blade Runner 2049 is a long movie. Although some are likely to have little issue with the meditative pace of the 163 minute runtime, there will also be those who are understandably turned off, and may even find it boring. It is nice that the film, unlike most movies released these days, actually takes its time in telling its story, but many viewers will remain anxious for things to speed up. And the length is not entirely flawless, as there are one or two action scenes that fail to drive the narrative forward—the original, with its leaner 117 minutes, was more tightly constructed.

In many areas, Blade Runner 2049 is equal to the heights of the 1982 original. The direction, writing, performances and visuals are all top-notch, with those involved all displaying outstanding commitment. While the villains are weak and contribute little, and the structure is not the most concise, the way the film takes its time and sucks in the viewer makes for a greatly immersive and rewarding experience. Blade Runner 2049 is richly deserving of all the attendance it can get, and without a doubt one of the year’s best films, with a rating of 9.7/10.