What Exactly Is PAL? 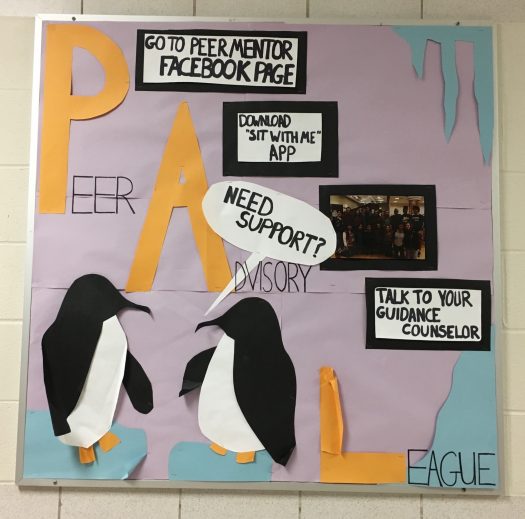 You have heard about them in The Daily Bulletin, seen the posters and large bulletin board in the History hallway, and maybe even had them visit one of your classes. But what, or who, is the Peer Advisory League?

PAL is a student-run group that aims to help students adjust to the high school. Student Council members created it during the 2016-2017 school year with the help of ELL teacher Heather Berlin. They wanted to give students support and help with specific concerns of the student body.

Anna Connly, a Senior leader of PAL, said its mission is to help “make the transition from middle school to high school easier, as well as try and get rid of the stigmas that existed between the relationships of underclassmen and upperclassmen.”

Susan Biggs, one of Northampton High School’s Chemistry teachers, described PAL as “students trying to help other students fit in to Hamp … I assume a PAL kid would help them with that,” Ms. Biggs said.

Ms. Biggs shared her support of wanting to contact PAL for a mentor if she had a student who needed a bit more support. “Yes, of course I would hope people use it and that PAL could somehow become even more pervasive in the community,” she said when asked if she hopes students get in contact with PAL.

Ms. Berlin stressed that it is a student-run organization, even though she took on a more authoritative role this year. She explained that the group is what the members wanted it to be and they were the ones who initiated and ran the group. “It’s youth empowerment, and that’s something that I think I would really like … I would like PAL’s reputation to be more as a group that is ‘yours’ to do what you want with it.”

Initiated during the 2016-2017 school year, PAL came together by a group of students who wanted to create a student led organization for students once Advisory, a period during the day for social-emotional support for students, disappeared. These students, Olivia Pruett, Julia Snodgrass, and later, Leila Markosian, recognized the potential for Advisory to help students if it was better developed and could better connect with students. They worked with Principal Bryan Lombardi to get initial grants and make PAL come together. Mr. Lombardi asked Ms. Berlin to help out by becoming the faculty adviser, and she agreed.

Thus far, PAL has visited ninth grade classes, and plans to continue to do so as often as needed. These visits allow PAL to help create stronger communities within ninth grade classes by having ninth graders talk with each other and find similarities between themselves. These meetings with freshman classes also help PAL develop better leadership skills, as well as connects upper and underclassmen. By meeting with freshmen, upperclassmen and underclassmen are able to  get to know each other better. In late August, PAL also helped during Freshmen Orientation by giving tours alongside the National Honors Society.

In the future, Ms. Berlin hopes to see more social justice projects around school. “I think that school engagement and a more positive school culture can be superficial, but if we really want to make big changes, I think that means seeing how institutional racism is affecting students.”

Ms. Connly hopes to see more events happen with PAL. She wants the group to be more well-known “instead of just being, kind of, these weird kids that come in every once in a while to freshman classes.”

PAL decided to offer “peer mentoring” to students who may need individualized support. Though this is open to all students, it is especially open to freshmen who find the transition to high school very challenging, whether it be with classes, schedules, or just needing a friend.

“That being said, anyone who wants to hang out with somebody, or ask questions, or get to know another person in this school, no matter what grade—we’re available for them,” Ms. Berlin said. “PALs are connected, and know a lot about the school, know a lot about how to succeed here, and how to navigate the system… PAL’s goal is to be able to match you with somebody, whether it’s in PAL or outside of PAL, who you can talk to.”

“We’re a bunch of people that just want to help make everyone’s high school experience better, regardless of their age or their social position. I think that it can be something helpful for everyone,” Ms. Connly said.

If you want to get in contact with PAL, you can talk to your teachers or guidance counselor, or reach out to PAL’s officers Anna Connly, Maninder Singh, Odelia Forman, Audrey Rahm or Olivia Lombardi. You could also email PAL at [email protected] and let them know what you are looking for. They are more than happy to be there for you.