Everyone anxiously waited to hear the winner of the 2017 Booster Week. Would the Senior Class lose their winning streak? Finally, the announcement: the Junior Class prevailed.

Friday, October 20th marked the last day of Booster Week and over the course of the week there were a few negatives that may have stirred up a bit of drama, but that did nothing to divide the classes and was nothing too heinous to deter school unity. 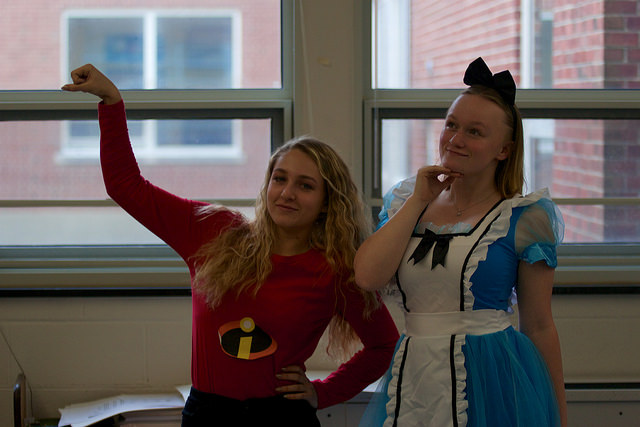 This year, there was no real advertisement for Booster Week. Two school days before the beginning of Booster Week, an announcement let students know the theme for the first day. On Monday, students came to school representing their class: Seniors dressed in Halloween attire, Juniors dressed as Disney characters, Sophomores dressed as if it were winter and Freshmen dressed like they were from the board game Candyland. The school was truly vibrant. Later that evening at the parade, the class floats lit up Main Street like the 4th of July. The senior float may have come in third place during the parade, but they dominated during limbo. 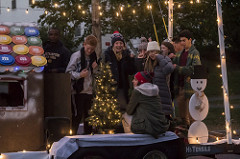 The sophomore float during the parade. Taken by NHS Technology Photography Department

The most exciting day of the week was Tuesday. Everyone looked cozy as they lounged around the building in their PJs. The lunch game was the donut eating contest where seniors came in first. A few determined students, such as junior Anna Stiles and senior Christian Hodgson even went as far as to eat their fallen donut off the floor. According to Senior class President, Anna Connly, pajama day is “always a good go to.”

During the first two days of Booster Week, the subject of the Senior Class cheating was brought to attention. The Senior Class has been known to cheat, yet this year faculty told the seniors they were not allowed to cheat. Despite this they still managed to cheat. Emma Tanner, Senior Class Treasurer, argued that “a lot of the games were too hard to cheat at,” in response to some of the accusations. She believed “people [were] blowing it out of proportion.”

Evelyn Thomas, Vice President of the Junior Class touched on this as well. “It creates a bad environment for incoming underclassmen because it prevents them from having fun and makes them feel helpless.” Ms. Thomas expressed. “If we change our policies and just let the seniors have all the money, then it will be a lot better.” 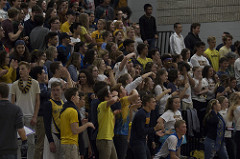 The Junior Class during the pep rally on Friday. Taken by NHS Technology Photography Department

On Wednesday, the school-wide Spirit was Pink/Crazy-out day. There were so many creative ways to tackle this, for example some people wore their clothes backwards and some wore eccentric patterns. One senior, Ben Gelb even wore a chicken head get up. The lunch game was the egg toss, and somehow, an egg even managed to find its way onto the ceiling.

Thursday was Beach Day. Most stuck to wearing towels, sunglasses and hats, but a few brave souls wore their swimsuits on top of their normal clothes. Many students, including Ms. Thomas and Esther Daube-Valois, Secretary of the Junior class, agreed that Beach day was far from their favorite. Michael Diaz, Junior Class President however, admitted that Beach day was when he went all out for spirit and even participated in the lunch game, which was trash can basketball. Students embraced their inner Michael Jordan and took turns shooting a basketball into a trash can. 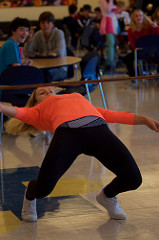 Thursday also saw the creation of the class windows. The seniors created a beautiful window with gorgeous origami graduation caps, the juniors produced an impressive devil out of blue and yellow sticky notes, the Sophomores created a vision test using their clever class year (2020) to come up with an inventive window, and the Freshmen were out of this world with their space inspired window.

However, the Sophomore window brought attention to their vision test because of the message they had written: “If you can read this down with the Juniors.” This message was met with the question of whether a class should be allowed to target other classes or not. “At first, I was actually a little offended by it,” Esther Daube-Valois said. “Because I didn’t think it was nice, I didn’t think it was fostering good school community, but then everyone else thought it was pretty funny so then I kind of changed my perspective.”

Randy Gordon, one of the Junior class advisors said he thought it was “a very negative thing,” saying, “I know the officers here have good spirits. But what I say is that it’s supposed to be a positive thing and that letting a very negative, intentionally harmful thing stand, counters Spirit week.”

Whitney Russell, the other Junior class advisor, said, “these challenges occasionally occur, and what we did overall, takes class to accept those insults, you’ve got to rise above it.”

“I don’t think the Sophomores meant any harm by it. I know all of the Sophomore student government, and they’re wicked nice kids,” Anna Connly said. “Do I think that maybe they shouldn’t have made it so public? Yeah, but I think that it was a harmless joke that I don’t think should have been blown out of proportion.”

Senior class advisor, Jeromie Whalen, agreed with Anna, saying, “Now is a good time to reflect on those actions. I think it was done kind of playfully. I would have personally shied away, or advised my class to shy away from that, but again, there’s two more years for the Sophomores. I don’t think it was necessarily done for any harm, the intention was not harmful, but I think that now, going into junior and senior year, I think that it’s a great time to reflect and become and demonstrate that cooperation, and collaboration, and that mutual respect.” 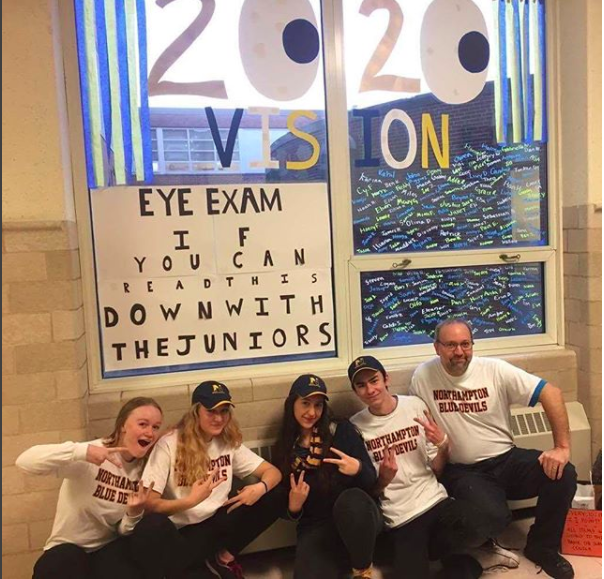 “We can see great. No need to hate. #1stplace” the Junior Class wrote on an Instagram photo acknowledging the Sophomore Class and their Booster Week win. Taken by the NHS class of 2019 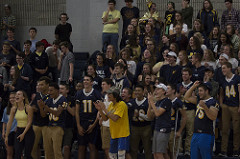 The Senior Class during the pep rally on Friday. Taken by NHS Technology Photography Department

Unanimously, all the class officers and advisors interviewed were fans of the pep rally. For 90 minutes, everyone in the school came together for friendly competition. The spirited chants came from all corners of the gym, and the games elicited enthusiasm.

The Trashcan Relay Race was the first event to occur. Ms. Tanner said that “seniors really [wanted] to pick it up this year and focus on having fun.” In one of the more anticipated games of the pep rally, the Trashcan Relay Race was won by the seniors, which may be credited to Eli Christopher and Christian Hodgson’s fun segment on “The Other Stuff” released for that Friday’s Transcript episode.

Up next was the pie eating contest, where volunteers willingly ate pies as messily as they could and got pie all over their faces. The freshmen took the crown for that one and they celebrated their win.

After that was the ever favorite Tug of War. Seniors destroyed the freshmen, even after their very determined chanting of “we believe that we can win,” and the sophomores beat the juniors. The seniors then went on to beat the sophomores, making them the winners again.

The final game was Knockout, where the seniors once again won the exhilarating game with basketballs. 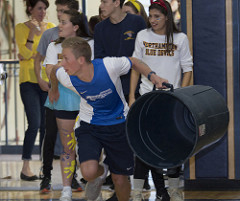 Finally, the moment we were all waiting for, the results of Booster week. Everyone was buzzing with anticipation as we found out the final scores. Freshmen came in 4th place with 25.9 points. Sophomores came in third with 34.1 points. Seniors came in second with an impressive 60.6 points, and Juniors finally came out on top with 71.9 points.

When discussing the competitiveness of the pep rally Jeromie said,“There’s a little bit of ribbing from each class, but at the same time, when that bell rings, I just saw all the classes come together as they filtered out. They’re going to see their friends, you know, the juniors are visiting seniors, seniors are visiting sophomores, freshmen are visiting juniors, everybody’s coming together and I think that that is really indicative of what we are as a community here at NHS.”

Let’s hope Booster week 2018 is as successful, or more successful than this year. 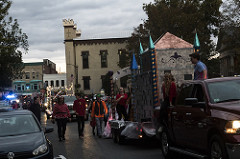