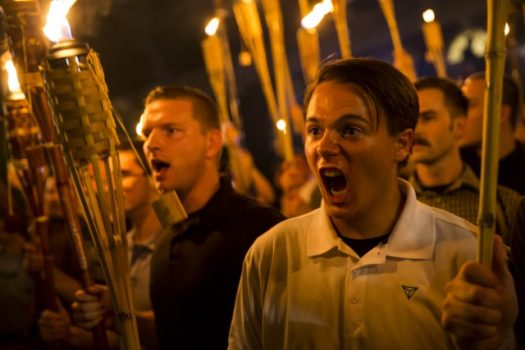 ▲
Some moron screams about the Jewish Conspiracy
Getty Images

▲
Some moron screams about the Jewish Conspiracy
Getty Images

This summer, a past many do not want to glorify came back from the grave to haunt citizens of Charlottesville, Virginia. On August 11th, hundreds of people marched through the city, carrying tiki torches and chanting Nazi-era and anti-semitic slogans. The next afternoon, a full-blown street brawl between Neo-Confederates armed with Lee’s battleflag and black-clad counter-protesters. Later that day, James Alex Fields Jr allegedly drove a into a crowd of anti-racist protesters, killing Heather Heyer and injuring at least 19 others. The Unite the Right rally at Charlottesville has sparked the debate over whether extremist groups should be allowed to demonstrate.

Even though the messages these people promote are horrendous, organizations such as the Ku Klux Klan and the Alternative Right, more commonly known as the Alt-Right, have the right to express themselves and espouse their views. The Klan, one of the first domestic terrorist organizations, and Alt-Right are some of the most notorious hate groups in American history. However, their members, as much as we might not like to admit, are Americans as well, and as such have all the rights that others enjoy, including the vaunted right to free speech. Their ability to spread their despicable ideologies, however abhorrent, is protected by the Constitution. Any government that attempts to violate that right goes against the Constitution it swears to protect.

There is a legal precedent that allows these groups to speak. In 1949, Arthur Terminiello, a Catholic priest, gave a speech to a veterans’ group in which he made inflammatory remarks towards Jews, prompting a clash between members of the American Communist Party, American Jewish Committee and Terminiello supporters. The Chicago police, charging him with starting a riot and disturbing the peace, issued a $100 fine, which Terminiello appealed as a violation of his First Amendment rights. In the case Terminiello v City of Chicago, the Supreme Court ruled in Terminiello’s favor, with Justice William Douglas writing as the majority, “it is only through free debate and free exchange of ideas that government remains responsive to the will of the people and peaceful change is effected. The right to speak freely and to promote diversity of ideas and programs is therefore one of the chief distinctions that sets us apart from totalitarian regimes.” However, even the majority acknowledged that “fighting words” were not protected by the First Amendment. So while Terminiello would be allowed to give speeches, he would not be allowed to spur people into violence.

More recently, the Supreme Court further reinforced hate groups First Amendment rights in 1978 with the case National Socialist Party of America v. Village of Skokie. In the 1970s, the majority of the residents of Skokie, Illinois were Jewish, and one in six had either survived the Holocaust or were related to someone who did. When the leader of the NSPA announced that they had scheduled a march in Chicago, things got messy. The city, fearing that members of the community might be adversely affected by the sight of the Nazi Swastika and other Nazi imagery at the rally, blocked the march. The American Civil Liberties Union appealed, and when the Supreme Court of Illinois did not work fast enough, it took the case to the United States Supreme Court, where the majority ruled that if “a State seeks to impose a restraint of this kind, it must provide strict procedural safeguards, including immediate appellate review. Absent such review, the State must instead allow a stay.”

Moving away from legal side of this issue, the best way to kill a horrible idea is not to censor it, but to kill it with light. Let these people talk, let them rally, let them demonstrate so that way people can see the ideas they espouse. Yes, some people will be allured by the hateful rhetoric, but many others will be able to see the toxic ideals for what they are. By allowing them to speak, they dig their own graves and lie in them. While they may have a platform to demonstrate, people will see how vile they actually are.

The greatest advertising these people get is from the media throwing a fit every time they want to demonstrate. The only thing that constantly highlighting every activity that white nationalists do is give them free advertising. These people thrive and desire attention. Broadcasting every little action these people do only thrusts them further into the public eye, and delays their inevitable fading from relevance. If every time these far-right groups have a rally, the media just ignored them, this issue would not have come up at all.