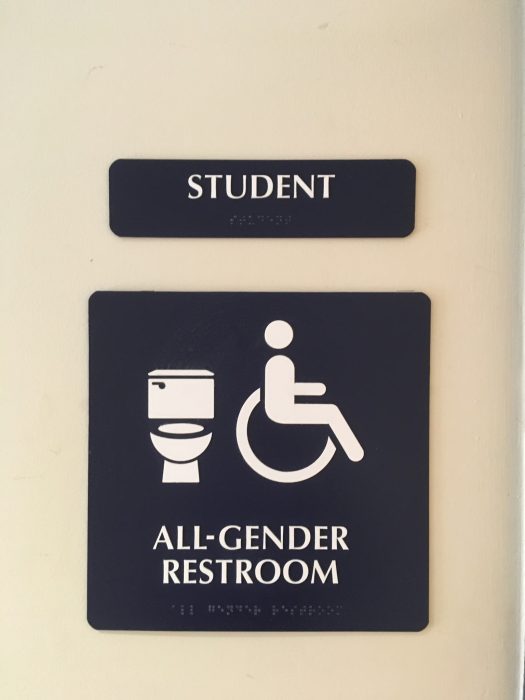 Someone who identifies as gender-nonconforming is a person whose gender does not fit within the binary of female or male. Gender-nonconforming students may not feel comfortable using the boys or girls bathroom and would benefit from gender-neutral bathrooms, according to Sylvia Shread (‘18), a leader of the Feminist Collective and member of the Gender Sexuality Alliance (GSA).

At the high school, students are separated by gender structurally. Boys go to the left side of the building and girls to the right. However, if a student identifies as gender nonconforming, they can either use the bathrooms in the nurse’s office, signifying they are sick, or go to Guidance, signifying they need guidance.

Shread described how making a change to “the structure of the school would represent our community values.” Not only does the placement of the gender-neutral bathrooms convey something is wrong with the students who use them, but the stark contrast of location between the different bathroom spaces isolates the gender nonconforming students, and actually affects their education.

The Gender-Neutral Bathroom Proposal is a plan to make all third floor bathrooms gender-neutral, and is backed by the Student Union, the GSA, and the Feminist Collective. The steps to do this project are as follows:

Northampton High School’s Associate Principal Celeste Malvezzi confirmed the administration supports the Gender-Neutral Bathroom Proposal, and said they have already begun to change the single stall faculty bathroom on the third floor to a gender-neutral bathroom. This allows easier access and increased availability for students.

Even though the Uniform State Plumbing Code of Massachusetts prohibits multi-stall gender-neutral bathrooms, Shread has been struggling to have more than one stall in the bathrooms for a long time. Many people share the same views as her, she says, and she wants to keep people’s minds open to the possibility.

As rewarding and beneficial as her plans may be, they come with a high price tag. Installing more than one stall in the third floor boys’ bathroom would require removing all urinals and replacing them with stalls and toilets. Even considering the construction and high cost of what would have to be done to the bathrooms, Shread is determined to push for these changes and to keep minds open to their possibility.

Last year, the Student Union surveyed the student body on their feelings about installing more gender-neutral bathrooms. The results were overwhelmingly supportive, although there was confusion around the specifics of the proposal.

“I know that they are out there and I want to hear their concerns because I think a lot of it comes from confusion or misunderstanding,” Shread explained, referring to people who do not support the gender-neutral bathroom proposal. “Which is fine because our society does not make this easy to understand.”

Shread suspects students and parents will have a bit of a push back but it has not happened yet. Administration has concerns they will receive complaints from parents about their children seeing another gender’s genitalia. Ms. Malvezzi has not heard much negativity from anyone about the gender-neutral bathrooms.

Although Shread has many ideas of ways to make the school environment more comfortable and accepting for all, she stated “I believe the administration is handling it to the best of their ability.”