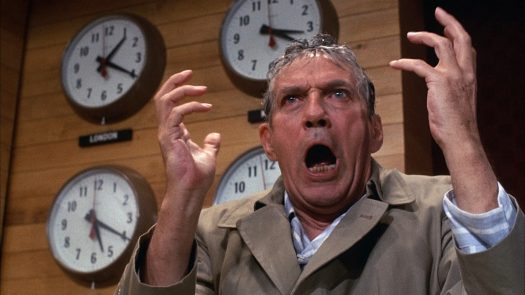 ▲
"I'm mad as hell, and I'm not going to take it anymore!"
Photo courtesy of travisryanfilm.com

▲
"I'm mad as hell, and I'm not going to take it anymore!"
Photo courtesy of travisryanfilm.com

This November 27 marks the 40th anniversary of the release of one of the greatest movie satires of all time, Sidney Lumet’s 1976 classic Network. With an all star cast featuring A-listers such as Faye Dunaway, William Holden and Peter Finch, (just to name a few) as well as an iconic screenplay by Paddy Chayefsky, this darkly comedic picture depicts a fictional television network exploiting a ranting anchorman that will literally do anything for ratings- even murder. At its core, Network is a satire of 1970s television and what it could possibly become if taken to the wrong lengths… Which, ironically, is incredibly close to what today’s social media-obsessed society has evolved into, making this one of the most prophetic films ever released. And so, 40 years later, just how well does this 1976 classic satire hold up?

The first noticeably impressive element of Network is Paddy Chayefsky’s Oscar-winning screenplay. Perfectly capturing a society where television seems to have taken hold of everyone’s lives, the picture has a tone of dark comedy and hysteria throughout. This is a society at its lowest point, holding television as its center, to the point that viewers do whatever anchor Howard Beale tells them to do, with not a sign of individualism amongst the crowd. As the ranting Beale proclaims at one point, “you people sit there- all of you – day after day, night after night, all ages, colors, creeds- we’re all you know…  You’re beginning to think the tube is reality and your own lives are unreal.  You do whatever the tube tells you.” Beale constantly makes uncontrollable rants against society, but his network still keeps him around because of his massive fan base, which could be said to be paralleled in modern times by the outrageousness of commentator Glenn Beck. (Beck has even stated that he identifies with Beale) Nearly everyone in the film has become infected by television- during what is supposed to be an intimate dinner date between two of the film’s leads, all that Faye Dunaway’s Diana can talk about are her ambitions for an upcoming slate of shows. (In an earlier date between the two, when remarking on their backgrounds, she remarks “what sort of script do you think we can make out of this?”) The TV executives in the film are also depicted as being perfectly willing to do anything for ratings, even teaming with a terrorist group who personally film their own exploits to craft a series, in what is an eerie prediction of both reality TV and YouTube.

On top of all this, the film is abundant with engaging monologues that glue the audience’s ears to the screen. Criticizing the downfall of society and individualism for the benefit of corporate profit, these speeches manage to avoid condescendingly talking down to the audience, all while revealing problems with society that we all know in our hearts but can’t quite put into words. One of the best scenes in the film comes when Ned Beatty’s Arthur Jensen rants in an uninterrupted 4 minute speech to Beale, stating that “There are no nations! There are no peoples… There are no third worlds!  There is no West!  There is only one holistic system of systems, one vast and immane, interwoven, interacting, multi-variate, multi-national dominion of dollars…  It is the international system of currency that determines the totality of life on this planet! That is the natural order of things today… There is no America. There is no democracy… We no longer live in a world of nations and ideologies, Mr. Beale.  The world is a college of corporations, inexorably determined by the immutable by-laws of business.  The world is a business, Mr. Beale!”

But to say that the screenplay, as good as it is, is the only thing that the film has going for it would be false. Network is practically oozing with strong performances, as is evident from the film’s three Oscar wins for its performers. (To be specific, Best Actor for Peter Finch, Best Actress for Faye Dunaway, and Best Supporting Actress for Beatrice Straight) William Holden has always been a greatly articulate actor, and his character of Max Schumacher is perhaps one of the most sympathetic in the entire film, an old-fashioned veteran of television who refuses to let it consume his life during a midlife crisis, becoming the most moral character in the whole picture. On the reverse end of the spectrum, however, is Faye Dunaway in her Oscar-winning portrayal of executive Diana Christensen, an almost empty shell of a human being whose only purpose is to expand her television network- being almost completely unsympathetic and lacking in genuine emotion or connection except for her overpowering desire to craft a television giant. (She states at one point in the movie, “I seem to be inept at everything except my work… All I want out of life is a 30 share and a 20 rating.”) And as compellingly subtle as these two can be, Peter Finch’s iconic portrayal of hysterical anchor Howard Beale provides a perfect counterpoint bursting with energy. His many electrifying rants rank among the best moments in the film, as his exploitation by his superiors turns him into a bitter, expressive and manic messiah of the silver screen. And that is not to say that the smaller parts are totally irrelevant, far from it- Beatrice Straight and Ned Beatty both make massive impressions despite being confined to one scene apiece.

And last but certainly not least, Sidney Lumet’s fine direction plays a large role in making Network what it is. He has always been a top-tier director, (For further reference see his 1957 drama 12 Angry Men) and here he is at his A-game. He gives the picture a close and personal feel, aided with tight pacing and an electricity that makes it impossible to peel your eyes from the screen, even when two characters are just talking.

He recognizes both the immense comedy and tragic plausibility of the script, playing things with plenty of realism, as well as a tinge of farcical madness beneath the surface.

It says something about Lumet’s direction that the film is so engaging despite, or even because of, an almost total lack of music, something that all other films have in droves. This gives the film its feeling of intimacy and realism, and what emotions a musical score normally would communicate, Lumet gets across with his shot composition, concise editing and strong performances.

All said and done, Network is a tremendous piece of satire. All of its performers are top-notch, crafting characters that have since become ingrained in the cinematic landscape. Sidney Lumet’s pristine direction results in a perfectly balanced piece of work that compliments its deep characters with a pessimistic but comic breakdown of society. And enough cannot be said about Paddy Chayefsky’s exquisite screenplay, playing all the right comedic notes and creating a haunting reality with its verisimilitude and madness. A picture that just seems to get better with age, thanks to its haunting predictions becoming reality with the rise of addictive sites such as Twitter and YouTube consuming mass culture, Network ranks amongst Dr. Strangelove as one of the greatest satires ever committed to film. A practically perfect movie, 1976’s Network more than earns its rating of 10/10.