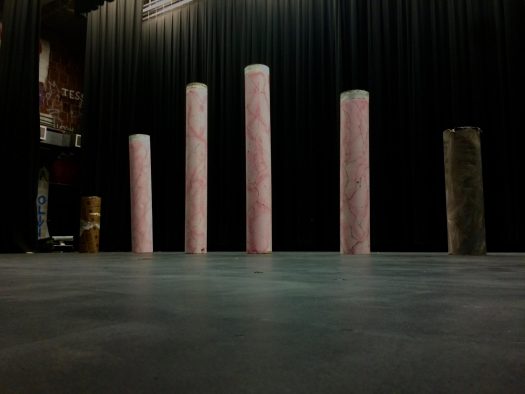 Northampton High School Theater has joined the Massachusetts Educational Theater Guild, and will be participating in its High School Festival in March of next year with the hopes of establishing a greater name for the program.

The “premier event” of the METG, the High School Festival shows over 100 one-act plays from member schools all over the state. Plays compete and are processed through three rounds, with two plays ultimately being selected to participate in the New England Drama Festival.

NHST has chosen to adapt Sophocles’ Greek tragedy, Antigone, for entry into the competition.

Linda Tardiff, director of the project, said “I’m really interested in why it’s important right now. Think about this election year; a new political leader can change all of the rules.”

The show’s relevance to this date, 5,000 years later, makes it an appealing option for the program.

NHST faces new challenges putting up a touring production, first of which being, according to Steven Eldredge, theater and film teacher, “Efficiency. You have to be efficient with every aspect of it. When we’re doing shows here, we get into this thing where people say, ‘Oh, we want our set to be naturalistic,’ and people end up building a real house or something.” Participating in this will force the production team to find solutions to transportability, compactness, and ease of setup.

“Theater artists need to be resilient and flexible, and not precious,” Eldredge concluded. Making these sacrifices allows the production to perform in multiple locations.

The project has had difficulty getting participants. Aurora Flynn, NHS student and lighting technician, said, “We’re not really advertising to anyone other than actors… it’s much more than that.” The project requires technicians, writers, anyone who can participate in the process.

“It’s also not part of the culture yet… it’s totally new,” Flynn continued.

Introducing a different style is, according to Eldredge, “challenging. It challenges everything we know about theater.” Everything about Antigone, from development to performance, involves new techniques and a style NHST has not yet seen.

Antigone began rehearsals at the beginning of this month, and will run for several months before the performance at the festival, with idealized completion in December, three months before the final performance. Going into March protrudes well into the also long period of musical rehearsals. “This won’t be the first time we’ve made changes to the entire schedule… but it may be [difficult],” said Eldredge.

This also conflicts with both fall and spring sports seasons, limiting participation from even people who only participate in one season.