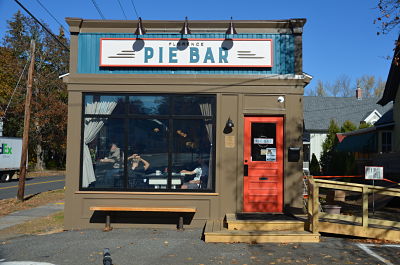 Though it’s only been open for a few weeks now, area residents are giving the Pie Bar in downtown Florence troubling reviews. There’s no question however, that the pie bar has been the talk of the town for months. But the real question is, does the Pie Bar live up to all of it’s hype?

Teenagers will find it troubling when applying for a job at the Pie Bar. Nell Sanders is a neighbor of the Pie Bar, and found interest in working there. When Sanders told the Pie Bar her age, employees told her because she was 16, she would not be hired as the Pie Bar “wanted to get [its] liquor licence,” she said. Sanders said she didn’t think obtaining a license was a “good idea,” because the restaurant is “already over-crowded and adding alcohol to a family breakfast place would just be weird.”

Another issue that customers may encounter is the lack of pie. Molly Hornby-Finch has only visited the pie bar once, and once was enough for her. “When I whent they didn’t have any pie,” Hornby-Finch said. She said she left feeling somewhat dejected.

“I was very excited going into it and didn’t know what to expect,” Hornby-Finch said. She stated she felt disappointed when the Pie Bar didn’t live up to the hype.

The Devil’s Advocate was unable to reach the owner and employees of the Pie Bar for comment. However, the only way to truly know what the Pie Bar is like is to try it. The Pie Bar is located on 17 Main Street, in downtown Florence.

NHS Photography
Pie from the Pie Bar in Florence.