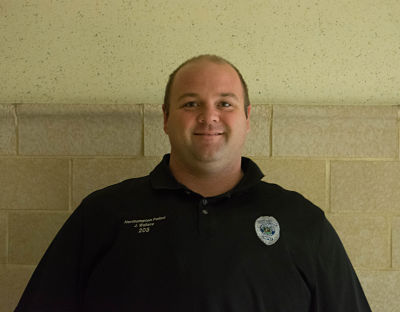 Officer Josh Wallace has been hired at Northampton High School for the 2015-16 school year as another authority figure that students may come to for help.

Some students are unclear about Wallace’s role at NHS. “He seems like he’s pretty cool,” said junior Patrick Quinlan, but added, “I’m not really sure what he does exactly.”

“My real reason for being here is to help [the students] and the staff and everything else,” said Wallace. “The students and everyone else that go to school in Northampton, they all have different problems, different issues. Sometimes they just need someone else to help them with it and that’s what I’m here for.”

Wallace also said he feels that by working at NHS he can help provide students with a more positive view of police officers. “Everything nationally isn’t the best for police right now,” he said. “So I want people to be able to see us in a different light, that we’re not the big, bad guys that some people portray us to be.”

NHS principal Bryan Lombardi said he felt similarly about Wallace’s role at the school. “He can really be a valuable resource if students are struggling with things before it gets to the law,” he said. “If a student is having some behavior [issues], discipline [issues], or they need some support, we can say [to Wallace], ‘Hey what would your take be on this? What can you offer this student?’” said Lombardi.

Wallace said interacting with others and helping them to work out difficulties in their lives is what he loves about his job. “I have the big brother complex,” he said. “I have a little sister and I like the idea that people call me when they need help.”

Wallace has been a police officer for 18 years and has worked with the Northampton Police Department for eight years. This is the first time he has worked in a school.

He was originally studying to become a marine biologist at the University of Florida, but he said he changed his mind suddenly, realizing that this was not the job he wanted to have. “I talked it over with my father,” Wallace said of his change in interest, “and he had a lot of friends who were police officers. It made sense that I got to help people work with people [and] figure out problems involving people.”

Wallace made it clear that he is not here to get students in trouble and that he knows what it is like to go to high school. “I was a high school student myself,” he said. “I know all the little ins and outs. I’m human as well as many of the guys I work with. We all went to high school, we all did stupid things, so we all can generally relate to what’s going on in a high school student’s life.”