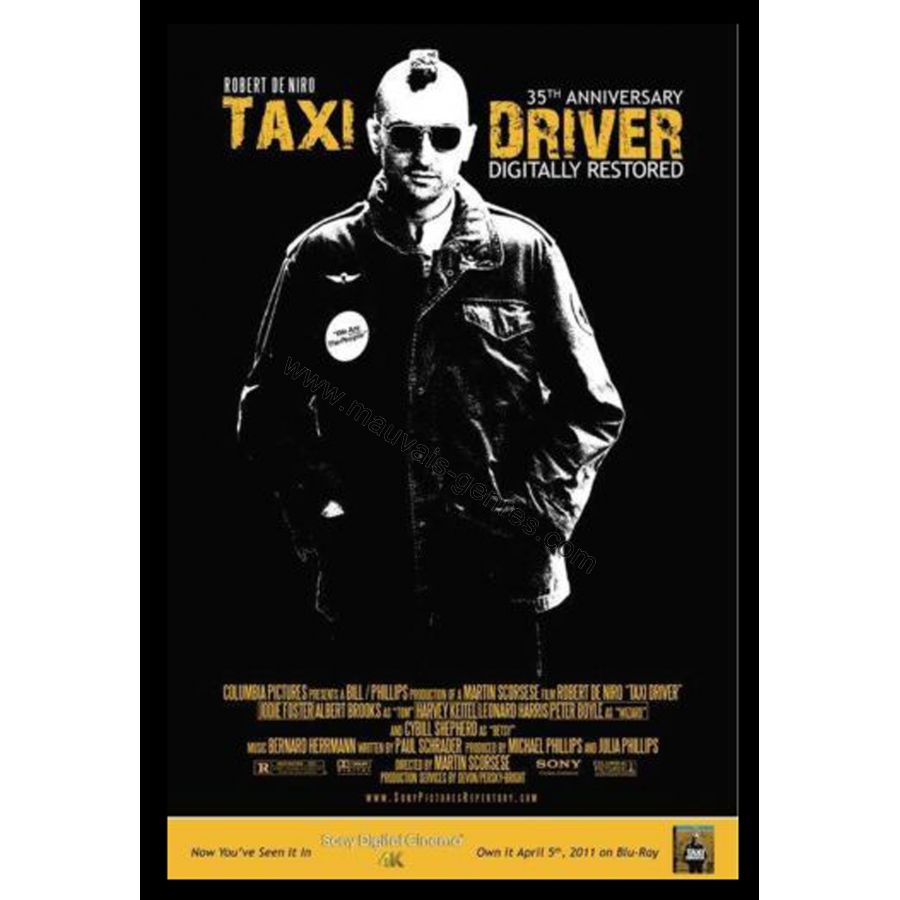 For those who haven’t seen it, (have you been living under a rock the past 45 years?) Taxi Driver stars De Niro as Travis Bickle, a Vietnam veteran/insomniac who takes a job as a taxi driver in New York City. He is incredibly disconnected from reality, dreaming of cleaning up the world, which he sees as filthy. His wish eventually sprouts to trying to assassinate a presidential candidate and saving a 12-year old prostitute from a business she doesn’t want to leave.

First things first: De Niro’s performance as Bickle is flat-out fantastic. He immerses himself in his character so much that he completely becomes Travis Bickle. He manages to get the audience to sympathise with his views, despite the fact that in any other movie he would be seen as a villain. You feel sorry for him in scenes where he tries unsuccessfully to interact with others, but also question his sanity. His idea of a date involves taking the girl to a Swedish sex-ed film; this shows how cut off he is from society, and also causes empathy for him when his date dumps him just because he didn’t know better. However, the scene that best shows off Bickle’s character is the iconic “You talkin’ to me?” scene, in which he talks to himself in a mirror, showing what he thinks of himself as well as his loneliness. (It’s also a testament to De Niro’s acting ability that the entire scene was improvised and still became so memorable)

Another great aspect of the movie is Martin Scorsese’s direction, using the different things that can be done with a camera to get inside Bickle’s head. He perfectly captures his disconnected view of the world by shooting scenes where he drives the cab, from his point of view, in slow motion, sometimes resulting in a fantastical feel. In select scenes where he is with fellow cabbies, while they engage in conversation, his attention is elsewhere, focusing on people who may be those that he despises, the camera closing in on them at a different speed than the rest of the scene. Scorsese has also admitted that the film includes religious symbolism, comparing Bickle to a saint who wants to rid himself of weakness. It may be De Niro’s performance that is the most memorable part of the movie, but the film has Scorsese’s fingerprints all over it. (He also has a brief cameo as a man in Bickle’s cab who plots to kill his wife)

But in the words of Japanese director Akira Kurosawa, “With a good script, a good director can produce a masterpiece… But with a bad script even a good director can’t possibly make a good film.” (Akira Kurosawa- Quotes- IMDb) So it’s excellent that Taxi Driver has a script equal to its lead performance and direction. As good as De Niro and Scorsese are, they would have nothing to work with were it not for the screenplay by Paul Schrader. Bickle’s dialogue, including his narration, show the viewer just how disconnected he is from society and how unpredictable he can be. The film almost never leaves Bickle’s perspective, emphasizing his isolation and loneliness. This allows the viewer to feel sorry for him, but also wonder if he is missing a few bolts. Hence, the script finishes off the trio of essentials for a film masterpiece.

And the technical elements of the movie are also very well done. The fantastical atmosphere created by the film’s cinematography, with its use of slow motion and fog, is pulled off exceptionally well. (It also helps that the movie is well shot) The score by Bernard Herrmann is wonderfully haunting and tragic, perfectly complementing Bickle’s loneliness and isolation. Bickle’s dark view of the world is shown off in the production design, presenting the streets of New York as murky, grimy and dirty. And in the movie’s violent climax, Scorsese doesn’t hold back, using as much blood and guts as possible. (Although he had to saturate the scene’s coloring a bit to avoid an NC-17 rating)

Ultimately, Taxi Driver is as highly acclaimed as it is for good reason. Without Paul Schrader’s script, it would be nothing. Without Martin Scorsese’s direction, it wouldn’t have its distinctive feel. And it certainly wouldn’t be as iconic without Robert De Niro’s tremendous performance as Travis Bickle. If you haven’t seen this yet, watch it ASAP. If you have, watch it again anyway, and then watch Scorsese’s mob picture GoodFellas. Taxi Driver is in my Top 25 of All Time, so it’s mandatory that I give it a 10/10.