Athlete of the Week: Ben Hill 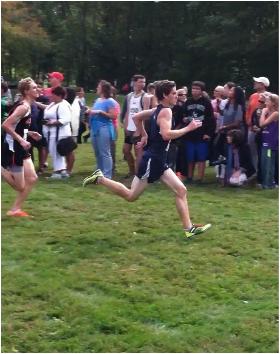 The NHS cross country team has been a powerhouse in Western Mass this season. A major contributing factor is team captain Benjamin Harvey Hill V, who won his first cross country 5K against Longmeadow on Tuesday, September 20th.

Hill has been running since 7th grade and was the fastest runner on the NHS cross country team in his sophomore year. He is a three-season athlete, also running indoor and outdoor track, but cross country is his favorite. Hill is in contact with several college coaches and said he fully intends to continue running after high school.

So far, the highlight of the season for Hill was winning the Crowley Cup at the Amherst Invitational. The boys’ and girls’ teams both came in 3rd to claim the combined championship title for Northampton. Hill has high expectations for himself and his team. He said he expects “our team … to win Western Mass. (Championship)” He also predicts that, “at least one of us will break the school record.” The current record was set in 2011 at 15:44. This is only 17 seconds faster than Hill’s personal best of 16:01.

As a captain of the team, many of Hill’s peers look up to him. However, this isn’t anything new for Ben because he is also the Co-President of the class of 2015. Hill lived in Georgia earlier in his life, and moved to Northampton in 5th grade. Despite moving to Northampton from another state, Hill still managed to excel in sports and academics. He said he prepares for the physical and mental stress of big races by fulfilling his list of pre-race “superstitions.” First, the night before a race, the whole team will have a pasta party in order to “carbo-load.” Hill tries to avoid candy and junk food on those nights and to get to sleep early. In the morning, he listens to gospel music, prays, and consumes a beverage of his own creation called “Heed.” Hill said “Heed” is “like Gatorade, but grosser.”

At the Bay State Invitational this past Saturday, Hill posted a time of 16:42 granting him 7th place, and aiding his team in an overall 2nd place finish. The Northampton girls’ team also finished 2nd. These results predict a promising rest of the season for Hill and the Northampton cross country team. Hopefully Hill can continue to perform as he has thus far and continue to lead his team to victory.